HiFive1 Rev B, Zephyr, and SPI

A few years back I purchased a SiFive HiFive1 Rev B board to join in the RISC-V revolution.

In this post we’ll look at using the HiFive to communicate with a Microchip 23LC512 SRAM via SPI. I’m fond of these chips because they support up to 5V and are easy to communicate with. Moreover, writing data and reading it back is a nice way of confirming your communications are working!

Zephyr is a scalable real-time operating system with permissive licensing (Apache). It is supported on the HiFive1, alongside Freedom Metal and FreeRTOS. Sure, we could have chosen to use Freedom Metal or FreeRTOS, but Zephyr provides a solid foundation upon which to build RTOS applications on a RISC-V platform.

SiFive built the HiFive1 Rev B to be “pin compatible” with the Arduino, and markets it as such. If you’ve used SPI on a board like the Arduino Uno you’ll recognize the following SPI pin assignments:

The HiFive1 schematics shows that it uses these same pins for the SPI1 controller.

We’ve used PlatformIO with Visual Studio Code in the past, and will use it here as well. Create a new project with PlatformIO:

For our board, we’ll choose the HiFive1 Rev B (SiFive) and for the Framework choose Zephyr RTOS. 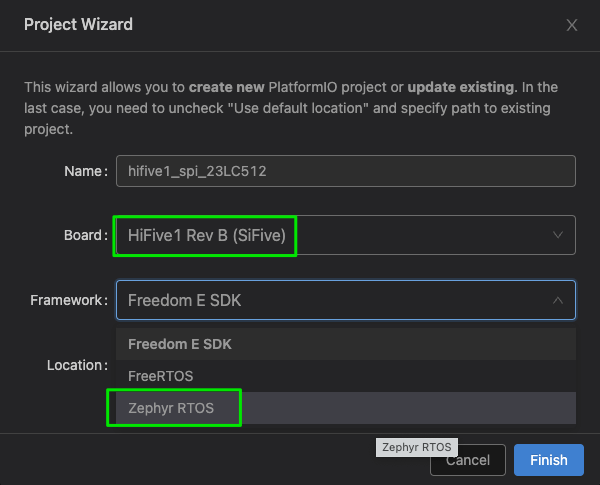 First, some basic code to ensure we can flash the HiFive1 Rev B and boot into Zephyr.

Now, to the fun stuff.

Like Linux, Zephyr uses the device tree to describe hardware peripherals. Unlike Linux, obtaining a handle to a device uses a quite sophisticated set of preprocessor macros. I highly recommend this presentation for an explanation on how the macros work.

Armed with this knowledge, let’s get a SPI device structure.

Unfortunately if you tried to compile this as-is you will likely end up with a linker error saying something like undefined reference to __device_dts_ord_30.

To fix this error we need to enable SPI support in a file called prj.conf. This file is merged together with Zephy’s KConfig. In your PlatformIO project folder, prj.conf should go in the zephyr/ directory.

Compile again and upload the firmware to the HiFive1 and you shouldn’t see Unable to obtain SPI device because you’ll have a valid handle. Let’s continue and build up our SPI configuration.

With that completed, the tricky part! We’re going to write the function that allows us to write a set of sequential bytes to the SRAM. To do so requires an understanding of the SPI protocol specific to the 23LC512 chip, and to gain that understanding look at the datasheet. After doing so, you’ll know to write a stream of bytes we first transmit the Write command (0x02), followed by a 16-bit address, followed by as many bytes as we want to write. All the while the chip select line needs to be held low. Again, this is made clear by the datasheet: 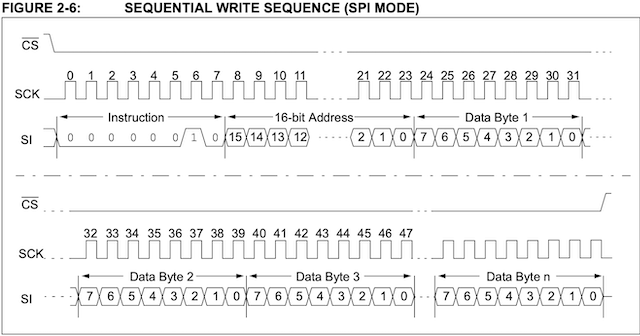 Let’s accomplish this in C with our Zephyr SPI API. First, the code, and then the explanation.

Four C structures are required to write a SPI transaction with Zephyr:

Our first structure, device, is the SPI device itself. The second, spi_config, holds configuration data specific to our SPI transaction. For example, what frequency are we using, is it MSB-first or LSB-first, etc.

The third and fourth structures package up the data we’re going to send. It’s worth reviewing this a couple of times. The complete SPI transaction will be in our buffer set. That buffer set is a list of buffers we want to write.

Once we’ve constructed our buffers and buffer set, we can write our data out in a single transaction with spi_write.

If you’re familiar with SPI you know that when you write data to SI, you’ll get data back on SO. This will be important when we attempt to read back in what we’ve written.

To test and gain confidence that our write and read functions are working properly we’ll generate random data to write to the SRAM. To do so we need to enable a test random number generator. In your prj.conf file add CONFIG_TEST_RANDOM_GENERATOR=y, which will allow us to write code like this:

Reading from the SRAM

Reading from the SRAM requires a bit more complexity in our spi_buf and spi_buf_set structures. First, the code, and then the explanation (of why it won’t work!).

While this looks like it would work, and our logic analyzer is able to interpret the data, here’s what we see in the console:

The first three bytes of our read buffer is zeros, and the last three bytes that were written are missing. Recall once again that SPI transactions are “write-a-byte-read-a-byte”. To read a byte we must transmit a byte. In the code above we have a mismatch of transmitting 3 bytes (thereby reading three bytes into our read buffer). To resolve this we’ll ensure that our transmit and receive buffers are of the same size.

So, what’s going on here? Notice that our transmit buffers and receive buffers are now the same size. Three bytes are transmitted while three bytes are read in. It just so happens that the three bytes read in will be discarded, but we then transmit out len bytes (of zeros), while reading in len bytes of data from the SI line.

An example of what we see with a logic analyzer:

Now, for the complete code:

If you happen to end up using the 23LC512 SRAM and have a Salaea logic analyzer, check out our 23LC512 High Level Analyzer! It’s available in the Extensions of the Logic 2 software: 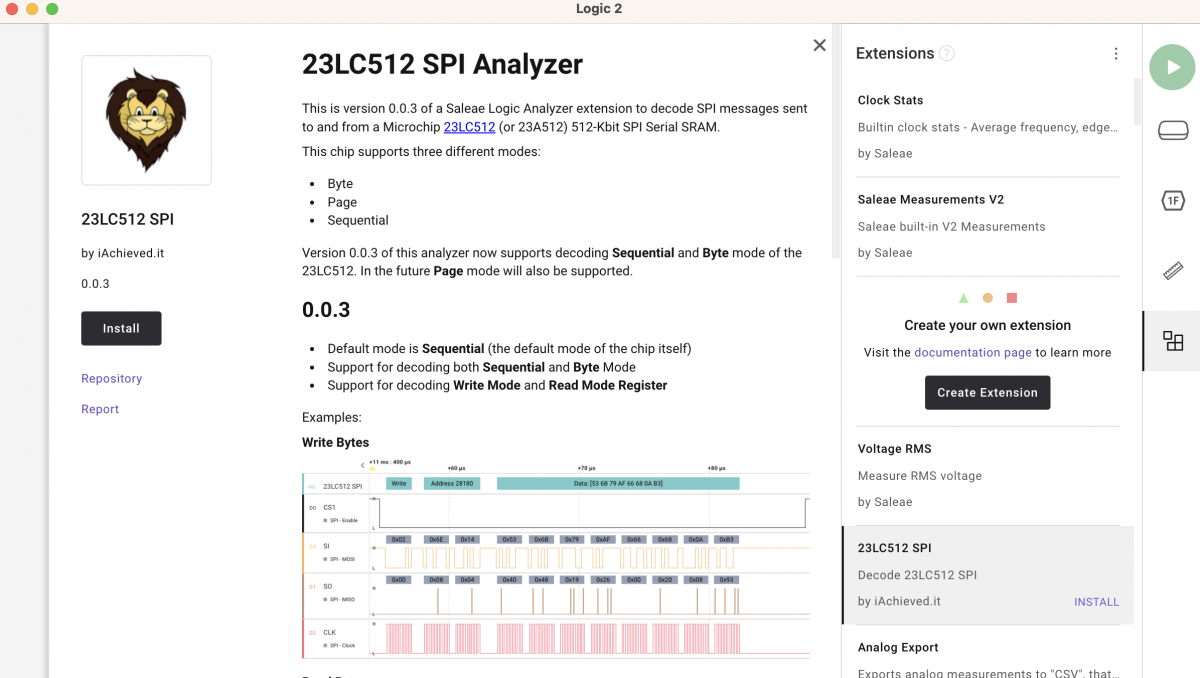 You can also find the source code for it on GitHub.

One thing I glossed over was the actual speed at which the SPI bus is running with the HiFive1 and Zephyr. Zooming in with the logic analyzer you can see that the clock frequency is definitely not 20 MHz, and is magnitudes of order slower. 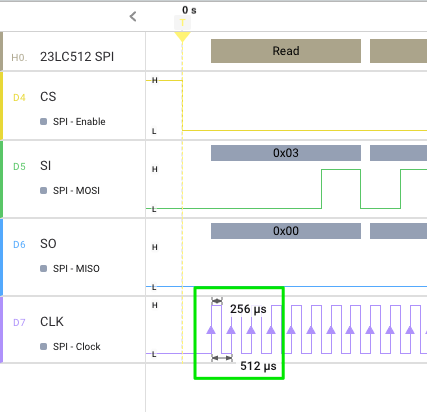 Well, we can “fix that” by dropping our SPI frequency down to 100 kHZ. Yes.

Ostensibly this slower SPI bus speed is due to the fact that the FE310 chip lacks DMA (directory memory access). I’m not certain at this point how to compensate for that to transmit data at faster rates to the SRAM, or if it is possible at all. Leave a comment if you have an idea! 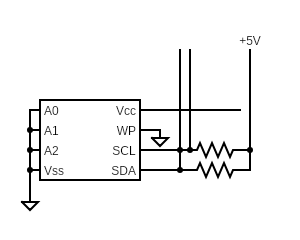 I’ve been excited to get my hands on a StarFive VisionFive and it finally arrived last week after being on ... 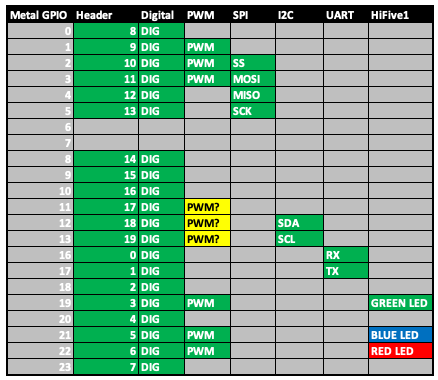 Let’s make use of the HiFive1 Rev B schematics to map out the GPIO controller device pins. Of particular interest ...