Apple has transitioned from different instruction set architectures several times now throughout its history. First, from 680×0 to PowerPC, then from PowerPC to Intel x86.
And now, in 2020 from Intel to ARM.

During the first transition 680×0 code ran in an emulator. In subsequent transitions Apple has utilized the translation application Rosetta. From Apple’s documentation, “Rosetta is meant to ease the transition to Apple silicon, giving you time to create a universal binary for your app. It is not a substitute for creating a native version of your app.”

From this you can see that the Safari binary contains executable code for both the x86_64 (Intel) architecture and arm64e (ARM).

As of this writing, November 24, 2020, a few notable applications that are already shipping universal binaries, such as Google Chrome and iTerm2. Of course, Apple’s flagship applications such as Safari, Xcode, Numbers, etc. all support the new ARM instruction set.

I’ve written a quick Ruby script to iterate through the executables in /Applications. To run on your machine: 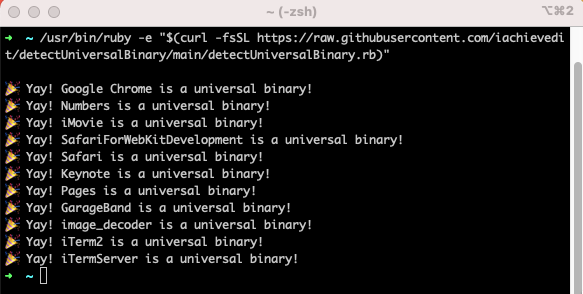